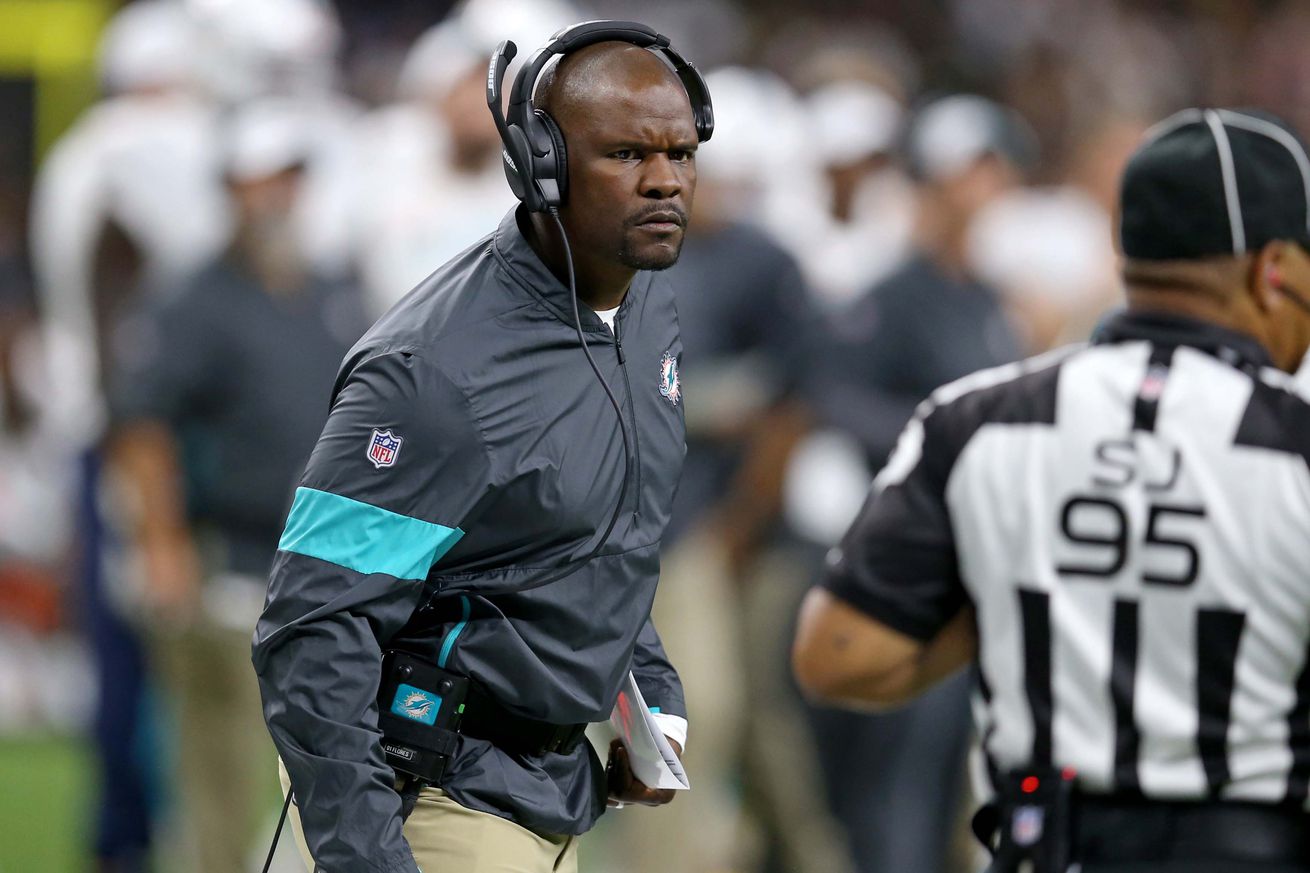 This defense has given up a lot of points so far.

Considering the Miami Dolphins defense has surrendered 88 points through two games, you might think that I wouldn’t be too kind to the unit. Surprisingly, you’d be wrong. It’s an unavoidable truth that Miami is a very bad team right now, but they’re designed to be bad right now. That doesn’t absolve them of the historically bad results they’ve put up thus far, but it also doesn’t condemn them to absolute incompetence.

The reality is that the Dolphins are still two regular season games into a grand, sweeping transition to their defensive scheme. Having run a strict 4-3 scheme on defense for seven seasons, new head coach Brian Flores and defensive coordinator Patrick Graham are changing things up dramatically.

Both former assistants under Bill Belichick - Flores worked in New England for 15 seasons, Graham for seven seasons - the duo are bringing with them the hybrid scheme that has been so successful in New England. This means that Miami doesn’t really operate in terms of a 3-4 or 4-3 scheme, and instead focuses on putting their players in the best position to succeed each week. It’s why so many Patriots players often change positions from year to year, and it lines up with the core philosophy of Belichick’s mentor, Bill Parcells: identify what the offense does best and make it your sole objective to take that away.

Making that kind of adjustment is a big task for any team, and when you combine it with a team that is probably definitely tanking, it makes things harder. For example, the Patriots defense ranked 20th in the NFL in Belichick’s first year, and that was with big names like Lawyer Milloy, Willie McGinest, Tedy Bruschi, and eventual Hall of Famer Ty Law. The Dolphins have... Reshad Jones?

All jokes aside, Miami actually runs a pretty creative scheme. They move players around with so much regularity that it can be confusing to the offense. Before trading Minkah Fitzpatrick to the Steelers, the talented defensive back was alternating between all five positions in the backfield, as well as playing both SAM and WILL linebacker. While it frustrated the young defender so much he asked for a trade, that’s the kind of versatility this defense, at least in theory, has.

Of course, the first step is to acquire talent that can execute that scheme. To that point, Miami has a few young players to build around. Linebackers Jerome Baker and Raekwon McMillan have shown a lot of potential so far, especially Baker, who leads the team with 20 tackles. McMillan has been used less after missing some preseason time with an injury, but he’s still put up eight tackles. Third-year defensive tackle Davon Godchaux has also been a rare disruptive force on the defensive line, piling up 10 tackles so far.

The biggest weakness for Miami has been their lack of a pass rush. After moving on from Cameron Wake and trading Robert Quinn, Charles Harris became the longest-tenured edge rusher on the team. Harris, a first round pick in 2017, has only managed three career sacks. In order to try and revitalize his carer, Flores and Graham have had him playing both with his hand in the dirt and standing up as an outside linebacker. So far, the results are mixed and Harris has yet to register a sack.

The Dolphins have registered three total sacks through their two games. One was from reserve linebacker Vince Biegel, who operates mostly as a situational pass rusher, and another from hulking nose tackle John Jenkins. The other sack was shared between two undrafted rookies in Samuel Eguavoen and Jonathan Ledbetter, who now finds himself on the injured reserve list. That’s why Miami claimed Taco Charlton off waivers on Thursday, although it remains to be seen just how this staff will seek to use him.

All in all, this defense does some pretty unique stuff with their fronts. Even though they don’t have the talent to execute it yet, Miami throws out some exotic looks that make it harder for the offense to make pre-snap reads. The secondary is also fairly exotic with their coverages, although that might lose some of its potency now that Fitzpatrick is gone. Cornerback Xavien Howard is the class of the group, and has looked solid while allowing only three catches on six targets. That opposing quarterbacks have only thrown his way six times in two games - in which opposing teams have thrown the ball 54 times - is an indicator of how much his coverage skills are respected.

The rest of the secondary, not so much. Bobby McCain converted to free safety after playing cornerback for the past four years with the team, and former Patriots corner Eic Rowe is allowing a completion rate of 83% according to Pro Football Focus. Ten-year veteran safety Reshad Jones is supposed to help on the back end but it’s not enough to overcome the talent deficiency everywhere else, and he’s going to miss the game due to injury.

When scouting this Dolphins defense, it’s pretty ugly so far but there are flashes, brief glimpses, of what it could become once they get the kind of players they’re looking for. As of right now, though, this unit reminds me a lot of the Giants defense: schematic creativity that ultimately goes nowhere. And in case you missed the Cowboys’ season opener, the Giants defense is not good.