PFF: La’el Collins is the highest-graded offensive lineman in the NFL through Week 3 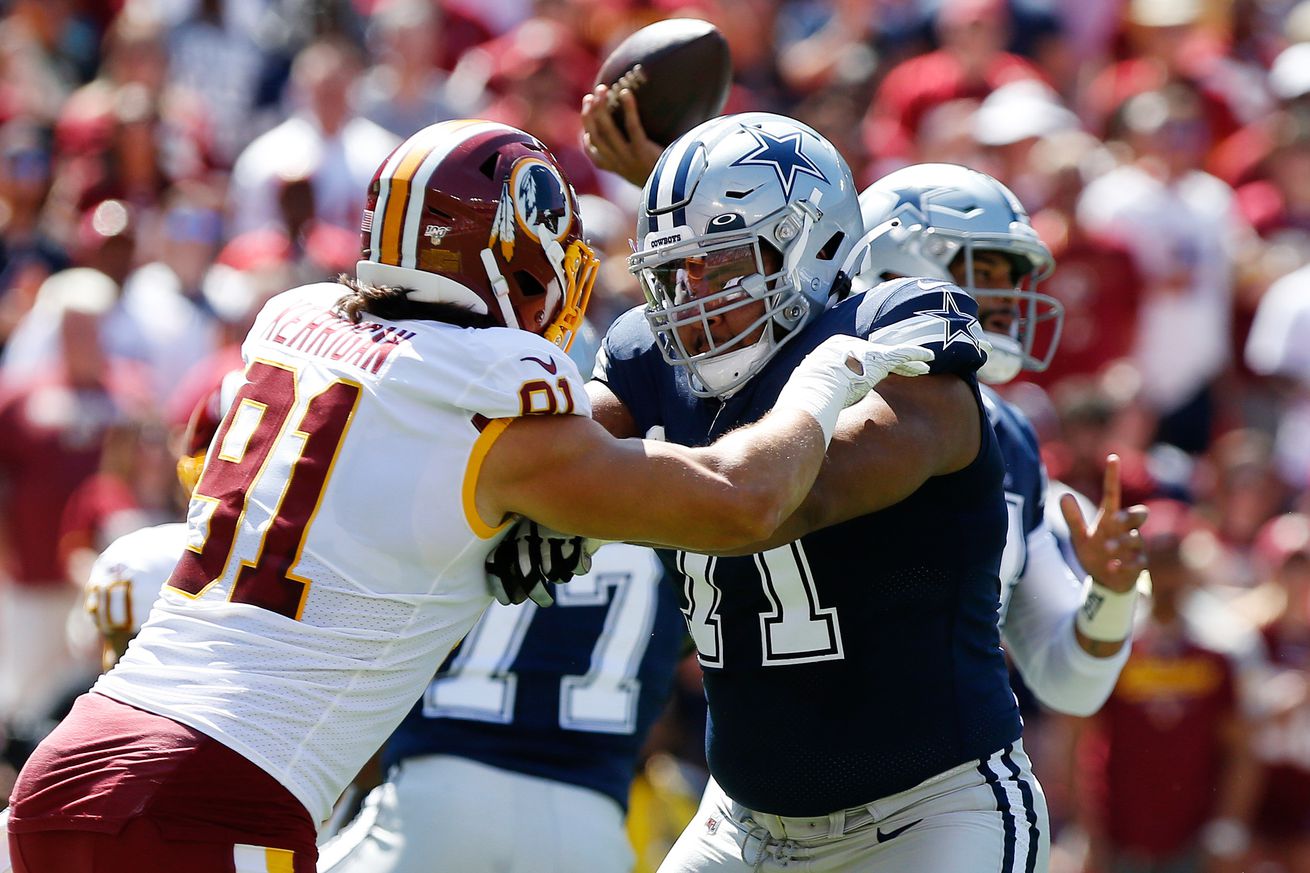 First place, is that good?

The Dallas Cowboys have been experiencing a lot of offensive success through the season’s first three games, it’s a big reason why they’re undefeated to this point. Dak Prescott and Ezekiel Elliott are off to career-best starts and Amari Cooper is on pace to average at least a touchdown in every game. Life is good.

There are a lot of things that make this possible and unlike the pie that Jerry Jones often alludes to there is plenty to go around in terms of responsibility. Kellen Moore has brought forth a lot of new offensive ideas, Jason Garrett obviously oversees it all, Jon Kitna has been exceptional at working with Dak on his mechanics, and Marc Colombo continues to return the offensive line to their optimum form.

Of course, the offensive line as a whole deserves enormous credit. Cowboys fans have grown accustomed to domination in the trenches which is why there was some concern there a season ago. The group is healthy and settled in and playing like the best in the NFL.

PFF has the Cowboys offensive line as just that... the best in the NFL

We’re only three weeks into the season as mentioned, but we’ve got data to go off of. Pro Football Focus has been handing out their usual grades and, while there are some things that people tend to disagree on with PFF, it’s likely that Cowboys fans will enjoy this.

PFF has the Cowboys as the top offensive line in the NFL through Week 3. What’s more is that they have La’el Collins graded as the best offensive linemen in the entire league to this point.

The Cowboys leap-frogging the Eagles in these rankings is largely due to the performance of newly minted right tackle La’el Collins. He’s not only seen his play take the next step through the first three weeks, but he’s also the highest-graded offensive lineman in the NFL currently. After allowing 46 pressures last season, Collins has allowed only one this season.

If you rewound the clock about a month you’d see Cowboys fans preparing for La’el Collins to leave in free agency following the 2019 season. It just seemed like he would be the odd man out when Ezekiel Elliott, Dak Prescott, and Amari Cooper all got their deals. Obviously only Zeke has one at the moment.

This felt true because Dallas extended DeMarcus Lawrence and Jaylon Smith earlier in the offseason. In addition to the pending triplets Dallas also has to figure out what they’re going to do about Byron Jones’ contract expiring, that’s why La’el Collins signing an extension with the team felt like it came out of nowhere.

Collins’ deal with Dallas was a five-year extension with $50M in new money and it felt like a luxury-ish sort of spend. With Connor McGovern being drafted six months ago there were a lot of assumptions that he would be the left guard of the future with Connor Williams sliding in at right tackle for Collins. That won’t happen and thank goodness for that (with no disrespect intended for Williams) because Collins is ballin’ out right now.

I've been really impressed with how La'El Collins (year 5, 3rd at RT) has looked these first two weeks. His pass set & ability to get to his landmarks more square than in the past have been notable. Still a very physically imposing run-blocker.

This OL is a weekly must-watch. pic.twitter.com/D2gb0n9Qjo

It feels like Collins is often the forgotten man along the Cowboys offensive line as people tend to hype up Tyron Smith, Zack Martin, and Travis Frederick before him. Collins is playing out of his mind right now and considering he just signed an extension with the team that should make us all feel very good about the future of the right side of the offensive line.

First place, is that good?

WATCH: Phil Mickelson is here to help Tom Brady with his calf woes

PFF: La’el Collins is the highest-graded offensive lineman in the NFL through Week 3

The 49ers have already matched their takeaways from the 2018 season