R.E.M.’s ‘Monster’ Is Still Trying to Reach You, If You’ll Let It In 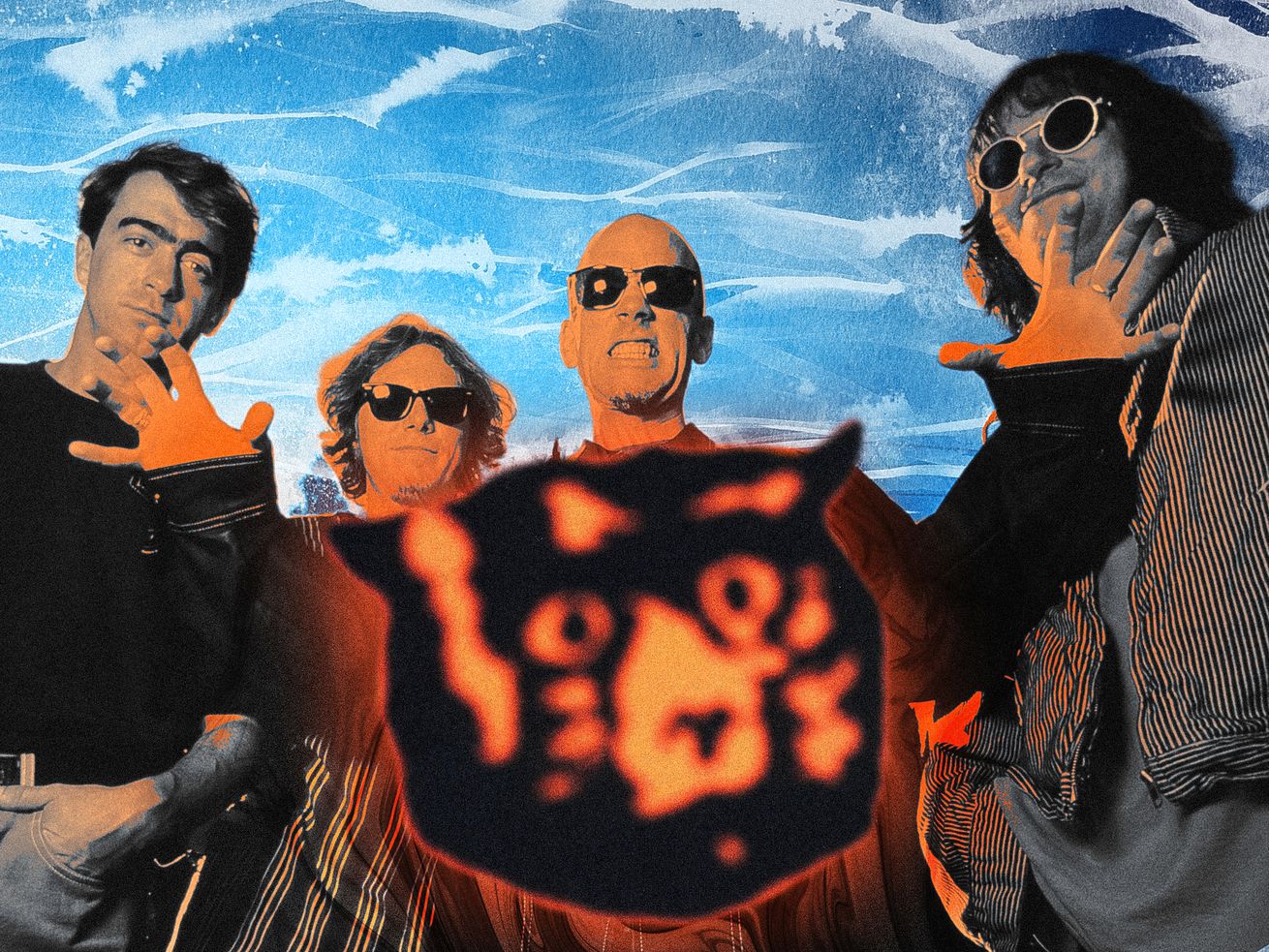 The band’s muddier, but often sexier, follow-up to their biggest work turns 25 this week

The tragedy of R.E.M.’s brash and wounded 1994 album Monster, which (tragically) celebrates its 25th anniversary on Friday, can be summed up by “Let Me In,” a desperate plea to Kurt Cobain, who died by suicide in April of that year and was therefore no longer around to hear it. “I only wish I could hear you whisper down,” R.E.M. frontman Michael Stipe moans over aggressively smeary electric guitar—quite uncommon for the band at the time, hence the brashness—that renders his words nearly inaudible. “Mr. Fisher moved to a less peculiar ground / He gathered up his loved ones and he brought them all around / To say goodbye, nice try.”

That’s “Mr. Fisher” as in a fisherman, as in the fisherman. “I think in the aftermath of his death, Kurt seemed like a Jesus figure to so many people that I went to the obvious biblical reference there,” Stipe explained in 2008, as part of an extraordinary weekslong fan Q&A about his songwriting process hosted by Matthew Perpetua’s MP3 haven Fluxblog. “I was still in shock when I wrote and we recorded the song.”

Stipe’s shock, and the societal wound that triggered it, is still a viscerally upsetting thing a quarter-century later, undiminished by neither the (tragic) passing of time nor the occasional comedy of Monster, which can be best summed up by the very stern and inadvertently quite goofy “Bang and Blame” video.

I liked this song quite a bit as a moody teen! And yet, yes, hello, there is guitarist Peter Buck vibing heavily with his amp and channeling Neil Young in terms of both distortion and overall shagginess. And bassist Mike Mills rocking the Nudie suit. And drummer Bill Berry rocking overalls. And Stipe himself retreating from his microphone in primo alt-rock frustration whilst rocking blackout sunglasses and an oversize sweater within which his skinny arms struggle immensely, a metaphor for the internal struggle of ’90s rockers and moody ’90s teens alike. The Kurt Cobain afterworld was less a thing that happened, after all, than a thing that happened to you.

The notion of R.E.M. as merely delicate and jangling and soft was suspect from the start: Their incredible version of “Radio Free Europe” for David Letterman in 1983 is as tough, as physical, as aggressive as it gets. But Monster—the band’s ninth studio album and the follow-up to their stately and deified 1992 career highlight Automatic for the People—is by design a surlier, muddier, gloomier, but also often sexier affair, radiating a danger mostly personified by the uncommon shuddering roar now emanating from Buck’s beloved amplifier. “Pete bought a Marshall,” is how Berry explained the band’s ardent new direction to The Baltimore Sun. It all goes a little overboard. But that was likely the point.

Cue the lascivious reverb that slashes through the opening seconds of “Crush With Eyeliner,” which Courtney Love at least vainly thought was about her. (The giveaway, from her perspective, was the line “She’s three miles of bad road.”) Monster, a formal experiment in decidedly informal grunge-era rock-star ardor that somehow sounded like a jovial time capsule even at the time, stands apart from the eight R.E.M. records that preceded it and the six that would follow in its wake before the band’s final 2011 breakup. The crunchy singles, from “What’s the Frequency, Kenneth?” (which quotes two guys who assaulted Dan Rather in 1986) to “Star 69” (talk about a time capsule), sounded great on alt-rock radio amid blocks of Nirvana songs and children-of-Nirvana songs. And the ballads gleamed even amid this newfound grime, particularly “Strange Currencies,” which, for the record, is the first song I ever tried to learn on guitar in high school, marveling at the power a handful of chords I’d theoretically already learned could have when fused together by experts, goofy and stern as those experts were willing to appear.

I am obligated to inform you that the standard rock-critic joke about Monster is that it is without question the single most popular/unpopular used CD of all time, such that a Popmatters writer once wrote about his seven-year attempt to actually get a record store to buy his copy. Several Twitter jokers, in fact, suggested that the upcoming six-disc Monster box set, due out November 1, should come packaged in its very own used-CD kiosk.

As backhanded compliments go, this is not the nicest thing anyone has ever said about R.E.M—that said, Monster had to sell enough copies in the first place to achieve this honor, and in fact went quadruple platinum. But used-CD stores, also, were a vital element of the turbulent and frequently rad ’90s experience. It is true that Buck’s guitar sound for this record and basically this record only—heavy as possible on the tremolo, raucous but never quite disruptive—gets a little repetitive. (When listening to Monster in full, the very familiar opening surge of “I Took Your Name” was always the point when I thought, OK, enough.) But there are far worse years for an album to pin itself to, precisely, than 1994, three years after the Year That Punk Broke, and the year that punk broke our hearts instead.

The upcoming Monster reissue has the usual flourishes (a modest remastered version, copious demos, live material), but also liner notes from Perpetua himself and a full remix from original producer Scott Litt that dramatically scales back the guitar squalls and implants Stipe’s voice directly in your ear, such that when you go back to the original version it sounds like he’s singing underwater. This proves to be a revelation on the noisier tunes (“Make your money with a clean-air denial,” I can finally hear him growling on “King of Comedy”) and the hornier tunes alike. (“Are you coming to ease my headache? / Do you give good head? / Am I good in bed? / I don’t know, I guess so,” I can finally hear him purring on “I Don’t Sleep, I Dream.”)

And then there is “Tongue,” a porn-y falsetto ballad after Prince’s own, uh, heart that takes it easy on the distortion and tremolo but further marks this as an R.E.M. experiment nary to be repeated. On the remix Stipe sounds even more exposed, which hardly seems possible, given the way he’d explained the song to a curious fan in ’08 during the Fluxblog AMA:

The song is from a female perspective and so sung in falsetto. Which is not real, but pulls at the heart. That’s what the song is I think. it is the ‘last ditch lay’ song. Not pretty but something we’ve all seen. Totally fabricated, not from real life. And “caramel turn on a dusty apology” is just what an unwrapped caramel in a corner would look like when the vacuum cleaner can’t quite pick it up and you have to do it with your hands. That’s what you feel like morning after when you’re not the first choice lay. It’s bad.

one of my favorite ever lyrics that I’ve written. It exactly feels like that feeling.

Monster is the sound of very serious men cranking up their amps so as to convey Even More Seriousness, and its most dated aspects are also, inevitably, its most endearing ones 25 years on. That goes even for a song as wrenching as “Let Me In,” which Stipe was never shy about describing as his failed, belated attempt to talk Cobain down. You might not need a six-disc monument to this record, now or ever, but it is startling indeed to listen as Litt clears the Marshall-amp clutter away so you can hear the desperation of Stipe’s attempt:

I had a mind to try to stop you
Let me in, let me in
And I’ve got tar on my feet and I can’t see
All the birds look down and laugh at me
Clumsy, crawling out of my skin

And then Stipe wails, in what is now a wrenchingly naked falsetto, “Hey / Let me in.” This sentiment did not reach its intended target in time. All the goofiness and nostalgia aside, though, it might still reach you.

The Giants matched two records that will stand forever