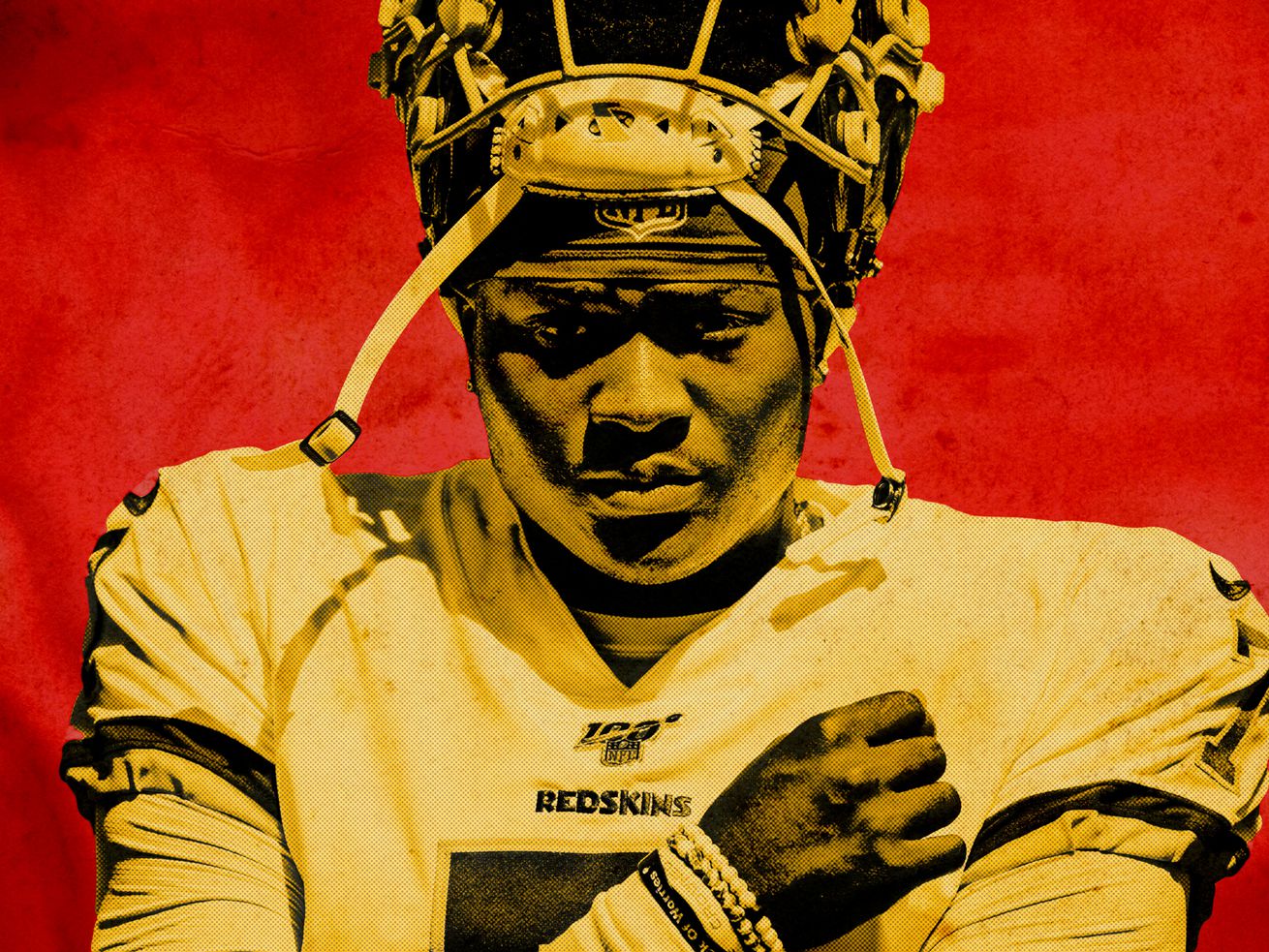 Washington looked hapless as the team fell to 0-3 on Monday night, but Jay Gruden is preaching continuity with Case Keenum

Washington head coach Jay Gruden may be the last person in the nation’s capital who does not want to start Dwayne Haskins. The Chicago Bears throttled Gruden’s squad on Monday Night Football, 31-15, a final line that obscures a game that was 28-3 at halftime. Washington plummeted to last in the NFC East at 0-3, effectively ending its season. The Washington Post reported that Gruden won’t be fired this week, but betting markets suggested in August he was facing long odds to make it through the end of this year, let alone the beginning of next season. Washington is playing for 2020, and Gruden is not taking the obvious step for a future he is likely not going to be part of.

“Not really, no,” Gruden said after Monday’s game when asked whether he would play Washington’s first-round pick next week. “I think the most important thing is we have to have some continuity. … If I didn’t think we had a chance to get better, then I would make a change, but I feel like Case [Keenum] has the tools to be a very efficient quarterback in this offense and get us some victories going forward.”

On many levels in Washington, continuity is the problem, not the solution, and even if continuity was the solution, it’s unclear what that it’s worth. Keenum, who had 332 passing yards on Monday but threw three interceptions and lost two of three fumbles, is on an expiring contract worth $3.5 million. The team’s other veteran starter, Colt McCoy, has not returned to practice yet after breaking his leg last season and is also on an expiring contract. Neither are part of Washington’s long-term future. That future belongs to Haskins, the no. 15 pick in this year’s NFL draft and the first quarterback the team has invested serious draft capital in since taking Robert Griffin III in the first round and Kirk Cousins in the fourth round in 2012. Washington was careful this offseason not to make the same mistakes they made with Griffin, who they leaned on to be the face of the franchise immediately. But not playing Haskins now is steering too far in the other direction. The team has no realistic chance of playing in January: Since the NFL went to a 16-game schedule in 1978, 186 teams have started a season 0-3, and just six of them (3.2 percent) made the playoffs.

Three other rookie quarterbacks have already made waves this season, including no. 1 pick Kyler Murray in Arizona, no. 178 pick Gardner Minshew II in Jacksonville, and no. 6 pick Daniel Jones in New York. Jones was taken by the division rival New York Giants this year to the delight of Washington fans thrilled to have Haskins fall to them. But in Jones’s first start on Sunday, he led the Giants to the biggest comeback in at least 50 years for the franchise. In a twist of fate, Washington will be heading to the Meadowlands to play Jones and the Giants on Sunday. But based on Gruden’s postgame comments, Haskins will be on the sideline for the contest. It’s a curious decision considering the Giants defense has been atrocious this season. Through three weeks, New York is tied for 30th in points allowed, tied for 31st in passing first downs allowed, and dead last in passing yards allowed. There’s also the plot twist that Haskins is from Highland Park, New Jersey; grew up a Giants fan; and seemed to want the Giants to draft him. Pragmatically and thematically, a Washington–New York matchup is the perfect way to begin his career.

Whatever blame Gruden gets, the important thing to remember with the Washington professional football franchise is the shit rolls downhill from command. In his six years with the team, Gruden has been consistently handed bad rosters handicapped by short-sighted decision-making from team president Bruce Allen. That is especially apparent this season. All-Pro left tackle Trent Williams has refused to report to the team after a dispute with Washington’s medical staff and front office over whether team doctors properly notified him of a potentially cancerous growth on his head (the growth was removed in surgery this offseason and determined to be benign). Without Williams, Washington turned to 36-year-old Donald Penn, who was exiled from Oakland for declining play, and 25-year-old former Giants first-rounder Ereck Flowers, who has the speed and stopping power of a revolving door, to fill in at tackle. It has not gone well. That was particularly evident Monday, as Khalil Mack and Chicago’s defense sacked Keenum four times and captured five turnovers. The blowout against the Bears was Washington’s eighth consecutive loss on Monday Night Football, and as a reporter noted in Gruden’s postgame press conference, the team has been down 40-0, 24-0, and 28-0 in three of its last four home games.

“We got to stick together, that’s all we can do,” Gruden said when asked what he told the team after the game. “We’re in this together.”

For now. A stronger postgame message came from Washington defensive end Jonathan Allen, a former Alabama standout drafted no. 17 in 2017 for his mix of talent and Nick Saban–imparted leadership skills. He displayed the latter with candid remarks Monday, as relayed by Brian McNally of NBC Sports Washington, that are worth quoting in full.

We’re supposed to be the best athletes in the world. If you don’t have the mental toughness to stay focused after three weeks in a 17-week regular season, I don’t know what to tell you. Each guy has to be held accountable and just take it from there. There ain’t no magic sauce to get this thing turned around. It’s just doing the little things right. And that’s what we’ve gotta do. Like I said, if you’re not going to support us now, which you shouldn’t because we’re playing like motherfucking shit, I don’t know what you want me to tell you. Don’t support us now, don’t support us later. But we gonna circle the wagons in this motherfucker and we’re gonna get shit right. Believe that.

Washington has to do the little things right. But first, the team has to do one big thing right.

If Haskins doesn’t play in Week 4, then Gruden would surely not start Haskins in Week 5 against the Patriots, whose defense hasn’t allowed a touchdown since the AFC championship game. Perhaps his first start could be at Miami in Week 6 against the Dolphins’ dilapidated defense. That would be a favor to Haskins, and it is possible Gruden is delaying Haskins’s debut to give the rookie practice time with Washington’s woeful and injury-riddled offense. But the truth is Gruden has already done Haskins his biggest service by sparing him an appearance against Khalil Mack and the Bears on Monday Night Football.

If Gruden thought Haskins could save his job, Haskins would be playing. He is not, which reveals the massively misaligned incentives between coach and team. Gruden is thinking in the short term because he knows if he doesn’t he will be fired. But the team needs to prioritize Haskins’s development. Washington could extend Gruden to develop Haskins, but he hasn’t won a playoff game in six years. It’s far more likely the team will fire Gruden by the end of the year and promote an interim head coach. Ironically, three of Gruden’s former assistants—Los Angeles’s Sean McVay, San Francisco’s Kyle Shanahan, and Green Bay’s Matt LaFleur—are all NFL head coaches, but Washington’s holding onto Gruden this long kept the team from the chance to give any of them a shot at the job.

The real question is what will happen to Haskins beyond Gruden. Haskins will have the benefit of playing with young receivers Terry McLaurin and Trey Quinn, both of whom look excellent thus far. He may not have the benefit of playing with tight end Jordan Reed, who suffered the seventh documented concussion of his career this season and may not play football again. Haskins also may never play with Williams, who seems content to retire rather than play for Washington again. Perhaps the only thing we know, and the only thing that matters, is that Haskins will start for a team owned by Dan Snyder. Continuity is the last thing Washington needs.