The Ravens learned a lesson: Running the ball is still their identity 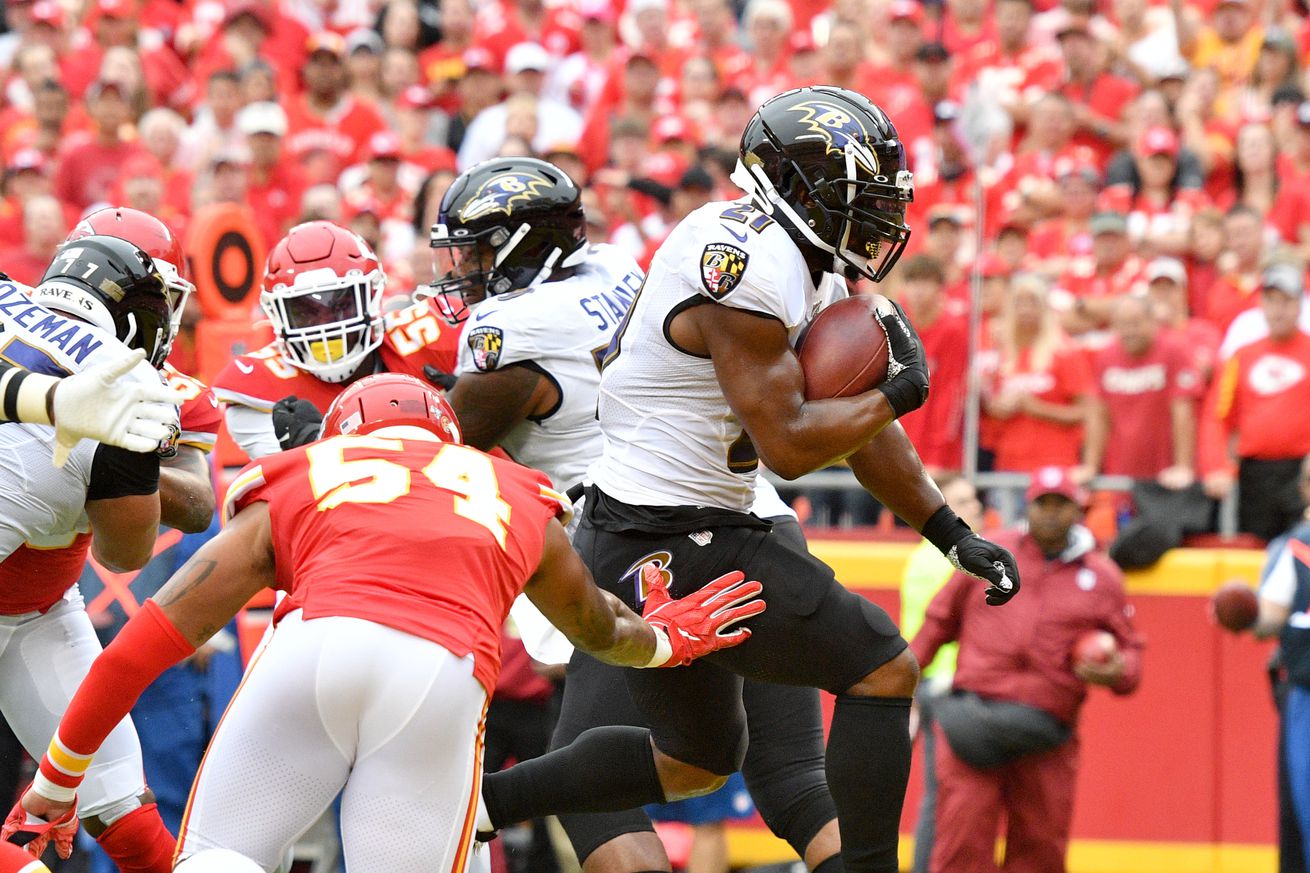 Lamar Jackson is a better passer than he was in 2018, but the Ravens are still at their best when they’re running over teams.

The Baltimore Ravens started their Week 3 loss to the Kansas City Chiefs looking like a team that knew it would need a lot of points.

The Ravens attempted a two-point conversion after three of their four touchdowns — though they were unsuccessful on all three tries. They also attempted three fourth downs in the first half, and converted two of them.

John Harbaugh’s sense of urgency was validated by the Chiefs basically scoring at will. Patrick Mahomes was as unstoppable as ever, completing 27 of his 37 passes for 374 yards and three touchdowns. Baltimore stayed close, but ultimately couldn’t keep up and lost, 33-28.

It’s far from a back-breaking loss for the Ravens. They’re still in a very winnable division and have much easier matchups on the schedule than a road game in Kansas City. Even better, the Ravens probably learned a lot about themselves Sunday.

Baltimore is a team that is at its best when it’s running the football. That was the case in 2018, and the loss to the Chiefs made it clear that it’s still the Ravens’ identity in 2019.

In Jackson’s stat-padding pair of wins to start the 2019 season, he connected on big play after big play. He averaged 16.2 yards per pass attempt in a 59-10 win over the Dolphins and threw two touchdown passes to Marquise Brown that went for 47 and 83 yards. The next week, he found Brown for 41 yards late in a 23-17 win against the Cardinals to put the game on ice.

The Chiefs seemed determined to bottle that up and force Jackson to beat them with short passes. He still hit a few long-ish plays — like connecting with Brown down the sideline for 31 yards and lobbing up a 25-yard prayer to Seth Roberts — but Kansas City avoided game breakers.

With no long touchdowns to be made, Jackson struggled to dink-and-dunk the Ravens down the field. He missed open receivers, and made some reckless decisions — although his most careless throw actually worked out:

Jackson finished 22 of 43 with 267 yards, no passing touchdowns, and no interceptions. All things considered, that’s not a horrible day. He kept the Ravens in the game by leading them to 15 fourth quarter points, too — including a 9-yard rushing touchdown. His 21 incomplete passes were too much when the Chiefs couldn’t be stopped, though.

The real reason Baltimore was able to score as much as it did was because it couldn’t be stopped on the ground.

The run game needs to be the Ravens’ identity

Mark Ingram finished Week 3 with 103 rushing yards and three touchdowns on only 16 attempts. His backup, Gus Edwards, added another 53 yards on just seven carries and Jackson rushed for 46 yards on eight attempts.

The mistake for the Ravens offense in Week 3 was that it ran the ball 32 times and attempted 43 passes. Baltimore could run at will, but didn’t seem to realize it until after the Chiefs already built a sizable lead.

The Ravens rushing attack was a force to be reckoned with in the latter half of the 2018 season too. With Jackson taking over for Joe Flacco at quarterback, the Ravens rushed for more than 200 yards in five of their last seven games. Jackson wasn’t quite there yet as a passer, but the Ravens went 6-1 with him as a starter by leaning into their identity as a bulldozer. The only regular season blemish for Jackson in 2018 was a 27-24 overtime loss to the Chiefs.

This year, the Ravens forgot what their strength lies when they watched their second-year quarterback light up the Dolphins and Cardinals through the air. Jackson is a much better passer than he was in 2018, but Baltimore is at its best when his throwing is complemented by a well-established running game. The Ravens thrived when they ran the ball 46 times for 265 yards against the Dolphins, and weren’t quite as dominant when they dialed it back to 33 rushes for 182 yards against the Cardinals.

If there’s a silver lining to the Ravens’ first loss of the year, it’s that it should help the team do a little soul-searching and come out better for it.

Four matchups to watch for the 49ers home opener