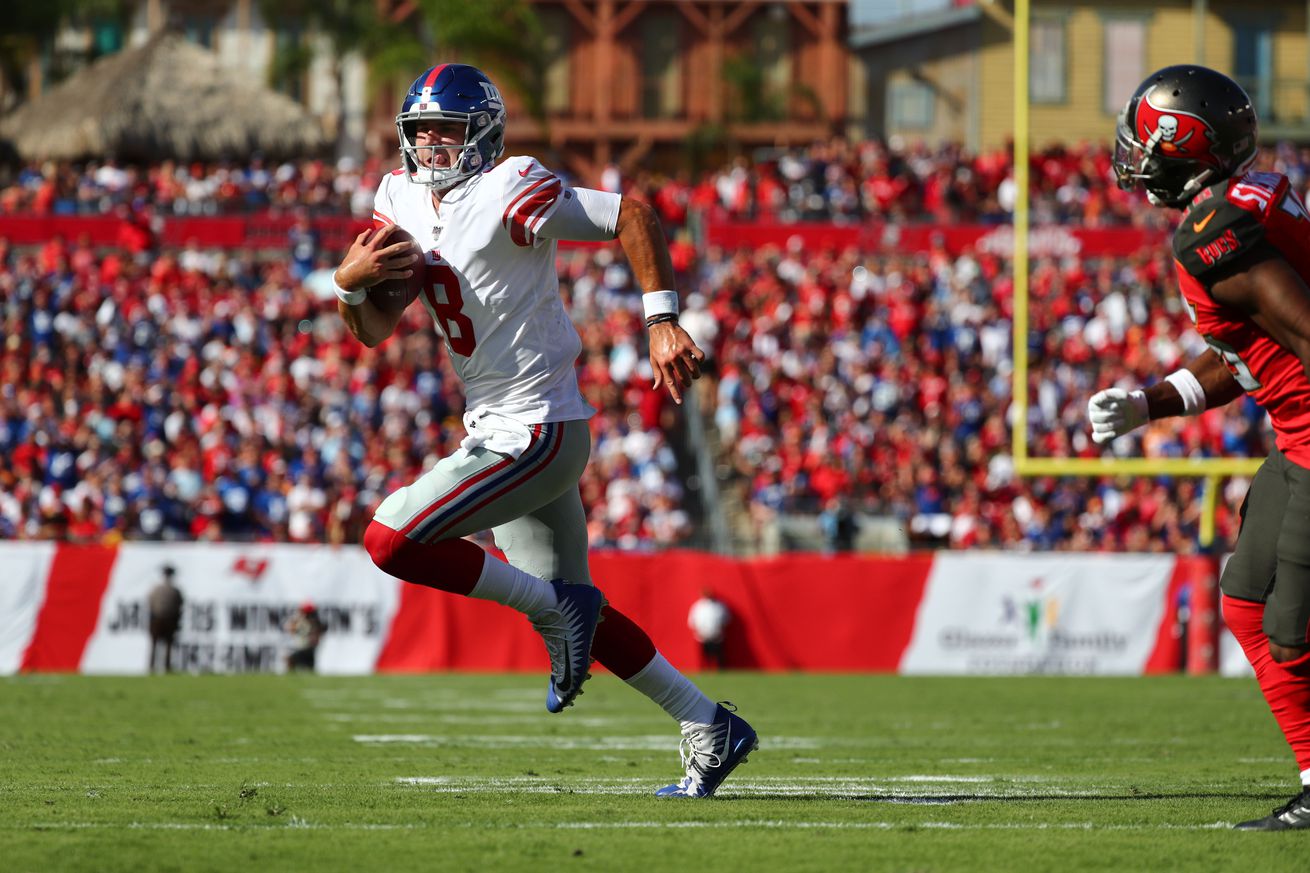 Saquon Barkley’s injury means we won’t know what Daniel Jones can do for a while longer.

The Giants were always going to struggle when it came to surrounding Daniel Jones with talented playmakers in his first career NFL start. Golden Tate can’t return to the field until Week 5 thanks to a PED suspension. Sterling Shepard took the field after fighting off a lingering injury that kept him off the field in Week 2.

And then, two quarters into Jones’ regular season debut with the first team offense, he lost the one other man strong enough of carrying the entire New York offense on his shoulders. Saquon Barkley left Week 3’s game against the Buccaneers with an ankle injury that kept him out of the second half of Sunday’s contest and threatens to keep him off the field for an extended stretch of Jones’ rookie campaign.

Saquon Barkley has an ankle sprain, per sources. Good news in that initial diagnosis is not a break. He’s in a boot and on crutches on the sideline. Expectation is that he will miss some time.

Barkley’s departure left the bulk of New York rushing offense in the hands of Jones and Shepard, two players who are not running backs. More importantly, it robbed the budding young quarterback of a safety valve who could have made New York’s thrilling comeback — one that culminated with Jones running seven yards up the gut for a game-winning touchdown on fourth down — a little easier.

Daniel Jones was outstanding in his first professional start Sunday, overcoming a pressure-filled ending to lead his team to a comeback win on the road. But even though he made those of us who questioned the wisdom of making him the sixth overall pick — read, most of us — look stupid with a strong start, he could be headed for stormy waters without his first mate to navigate opposing defenses in Week 4 and possibly beyond.

Barkley didn’t do much on the ground in his first game alongside Jones in the starting lineup, rushing for only 10 yards on eight carries. But while he’d been locked down in the first half against Todd Bowles’ resurgent Buccaneers defense, Barkley’s otherworldly talent means he was always just a few inches of daylight away from turning an eight touch, 10-yard line into a nine-carry, 88-yard performance. In 18 games as a pro, the former No. 2 overall pick has 18 carries of 20 yards or more — including two in 2019 so far.

That explosion ensures defenses can’t load up their secondary without paying for it, leaving a few extra passing lanes for Jones (and Eli Manning before him) to exploit. Downgrading from Barkley to Wayne Gallman, who has averaged only 3.1 carries per game with Barkley in the lineup, gives opposing defenses the latitude to back off the line of scrimmage a bit, taking away valuable extra steps downfield that can turn successful deep balls into risky interceptions.

Of course, losing Barkley doesn’t just take away a runner. He ranked second among NFL backs with 91 receptions as a rookie, pulling linebackers downfield and creating space for Evan Engram to operate with impunity in the middle of the field. Having to plan against Barkley as both a runner and a receiver is the kind of problem that keeps defensive coordinators up at night; few players in the league are capable of having as big and as diverse an impact as Barkley.

Now New York will likely head into Week 4 without its All-Pro tailback and definitely without its Pro Bowl wide receiver, who will serve the final game of his suspension next Sunday. That depletes a ragged group of wideouts even further, and that should make things much more difficult than they need to be for a rookie quarterback looking to make his mark for a struggling team.

Counterintuitively, Jones got better without the reigning offensive rookie of the year providing backup in Tampa. The rookie only connected with Engram once in the third quarter after hitting him with four passes on four targets in the first half, but it was for a 75-yard touchdown.

Engram is big and athletic enough to be Jones’ best friend and top target. But while that play was the product of an easy toss to an open target, Jones also proved entirely capable of fitting passes into the narrowing windows Barkley’s absence will make more common. Here he is threading the needle to instill some third-quarter fear into a Tampa team that led by 18 points at the half.

That play was set up by a picture perfect deep ball to Darius Slayton for 46 yards, delivered after rolling out through pocket pressure. While he’d record his only turnover over the game — a fumble after being sacked by Shaquil Barrett — after Barkley’s departure, he was statistically significantly better without his star running back in the lineup.

Most importantly, he was smart enough to find holes in an improved Tampa Bay defense when his team needed him the most, crashing into the end zone on the biggest play of his career to date (please ignore the text of this terrible Giants tweet).

So is Daniel Jones worse off without Saquon Barkley in the lineup? Conventional wisdom says yes. But Jones has done nothing but feed off doubt since joining the Giants, and that includes doing something Eli Manning never had in a long and storied career. Who knows how much longer he can keep this up while backed by a lineup dotted with second-stringers (and one that needed a botched 34-yard field goal to beat a team that went 5-11 in 2018).

Jones pushed his team to new heights and its first win despite a depleted roster. Now head coach Pat Shurmur has to wait and see whether this was a fluke or the beginning of a trend.

Jason Garrett press conference: Penalties need to be cleaned up