Cowboys news: Dallas moves to 3-0 after impressive second half versus Dolphins 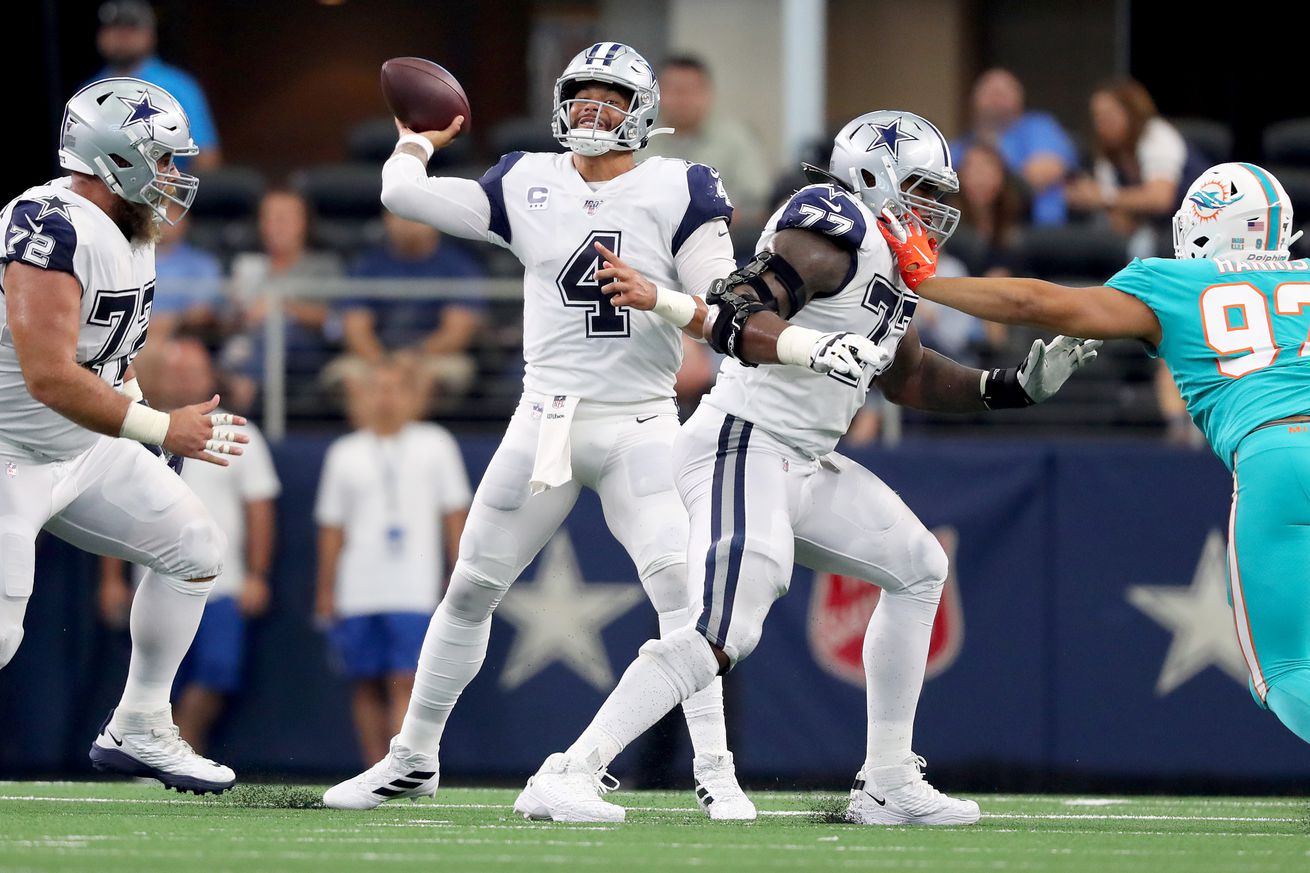 The first half was underwhelming, but things got going after the break.

The Cowboys moved to 3-0 following a 25-point victory over the Miami Dolphins on Sunday. Tom recaps the action:

It was not what so many of us expected. While the Dallas Cowboys got to 3-0 with a 31-6 win over the Miami Dolphins, this was supposed to be a blowout. The Cowboys did at least manage to cover the now-notorious three-touchdown-plus spread. But despite not absolutely blowing the outclassed opponent out from the beginning with a very lackluster start, the Cowboys exerted some dominance in the second half, with a huge disparity in yards gained, and of course the huge disparity in points scored. They might not have put up the huge numbers we hoped for, but they got the most important part done.

In one sense, this may have been a very good way for things to have gone. The Cowboys got a bit of a wakeup call with the early struggles to get everything on track. They made some successful adjustments and showed they could control a contest. They even got some good work in for some of their backups.

Oh. The Cowboys also now have a full two game lead in the NFC East, as the Philadelphia Eagles lost to the Detroit Lions. Cool.

Dak Settles Down After “Too Greedy” First Half - Rob Phillips, The Mothership

Things were kind of ugly in the first half, but Dak Prescott and the offense got things going after halftime to pull away and win comfortably.

“I was just being too greedy – one of those heat checks or whatever you want to call it, just trying to do too much in the first half. … Just take what the defense gives me. You get these shots in a couple of games and you get anxious. You want them again.”

Indeed, Prescott and the offense were prolific downfield in those first two games. They ranked fourth in the NFL with 11 plays of 20 yards or more, including nine in the passing game.

The second half looked much more like the efficient group that dominated Weeks 1 and 2. After a holding penalty wiped out a 74-yard touchdown catch and run by Cobb, Prescott hit Cooper again for a 19-yard touchdown and ran in for another on the next drive.

Suddenly, the lead had surged to 18.

Prescott continued his statistically perfect third-quarter streak – he’s 22-for-22 in the quarter through three games – and finished the game 19-of-32 for 246 yards with the two touchdowns and one interception, a 91.4 passer rating.

He has nine touchdown passes through three games, tying Don Meredith (1966) for the most ever by a Cowboys quarterback in the first three games of a season.

The schedule gets tougher from here on out, and the Cowboys must be prepared for what is ahead.

But just how good are they?

The Cowboys got away with a subpar first half against Miami that they might not be able to get away with against other teams.

Dak Prescott had as many incompletions in the first half than he had in the Cowboys’ first two games before rallying in the third quarter with his second touchdown pass of the day to Amari Cooper and his first rushing touchdown of the season.

The defense was saved by a forced fumble by Jaylon Smith that DeMarcus Lawrence recovered at the Dallas 9 late in the first half when Miami was driving for a go-ahead score. In the second half, they allowed Miami to drive into Cowboys’ territory twice.

The Cowboys are about to enter a tougher part of the docket with the Green Bay Packers (Oct. 6), New York Jets (Oct. 13) and Philadelphia Eagles (Oct. 20) up next before the Week 8 bye.

What history tells us about a Dallas Cowboys’ 3-0 start - Stefan Stevenson, The Star-Telegram

Overall, however, a good start means good things for Dallas. In 14 of the first 15 3-0 starts the Cowboys earned a playoff spot.

Broaddus wrote about several different things that caught his eye during Sunday’s victory, including Robert Quinn.

Michael Deiter was put in a terrible situation of having to move from guard outside to tackle. The more Deiter had to kick for width, the more problems he was going to have. That’s just not his game. With Robert Quinn rushing from that “Wide 9” technique, there was no way Deiter was going to cut him off before he got to Josh Rosen. Call it fresh legs, but Quinn was relentless coming off the ball in this game.

Give Robert Quinn an assist on the DeMarcus Lawrence sack. Quinn got up the field so fast that it forced Josh Rosen to step up to avoid the pressure. It was just that split second that took Rosen’s eyes from down the field that allowed Lawrence to put an inside spin move on J’Marcus Webb and chase down Rosen outside the pocket.

Amari Cooper has been a star since arriving in Dallas last October. He told the media following his two-touchdown performance that the “sky is the limit” for him and Dak Prescott.

Dallas Cowboys receiver Amari Cooper, who had two touchdown catches in Sunday’s 31-6 win over the Miami Dolphins, said the sky is the limit on the connection between him and quarterback Dak Prescott.

Helman wrote on the growing relationship between the franchise quarterback and the star wide receiver.

Amari Cooper could only smile when a reporter asked him to describe his touchdown catch.

He responded the only way he could: “Which one?”

Through three weeks, the Cowboys have showed off a dazzling array of options in their offense. Dak Prescott found eight different receivers last week in Washington, and he completed passes to seven different guys on Sunday against Miami.

Cooper has been one of the only constants, as he just keeps logging big days – and touchdowns. As he said, he found the end zone two different times against the Dolphins, putting a nice exclamation point on a six-catch, 88-yard performance.

As has been the case all year, Prescott certainly looked like he wanted to get Cooper involved early. The Cowboys opened the game with a 37-yard completion between the two on a play action fake. Ten minutes later, on the second possession of the day, Cooper beat Xavien Howard on a nice cut to the outside for a five-yard touchdown.

Check out our Dolphins victory recap episode of The Ocho where you can also hear sounds from the Cowboys locker room!

49ers Fanpulse: Our confidence is getting out of control heading into Week 3

What to do with Austin Ekeler in fantasy football: 4 scenarios to consider

The NFL world reacts to the Patriots releasing Antonio Brown