Steelers vs. 49ers: Will the 49ers wide receivers win against man coverage? 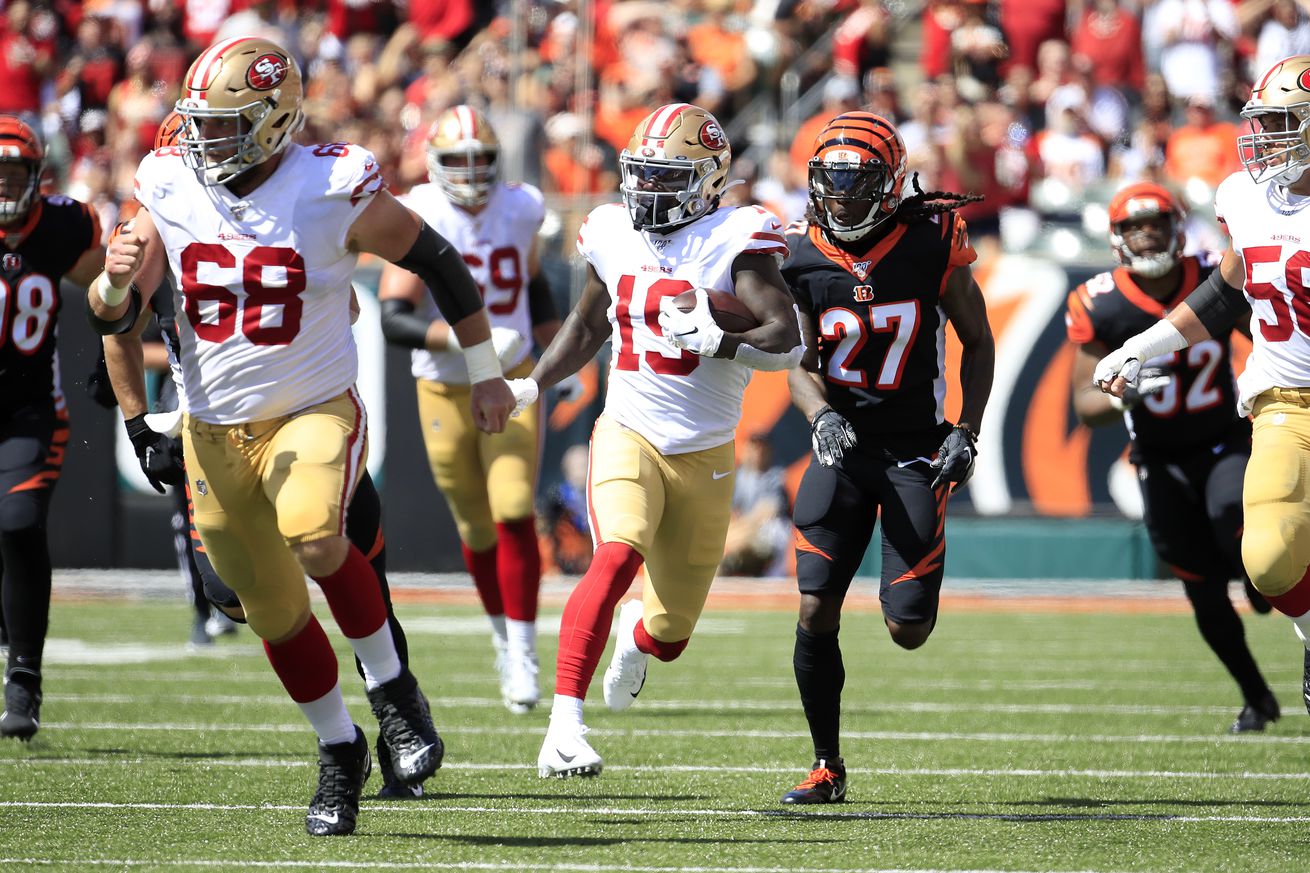 On Friday, we went over how the San Francisco 49ers will attack the fighting Mason Rudolph’s. Today we’ll take a look at how Jimmy Garoppolo and company will move the ball against T.J. Watt and the Pittsburgh Steelers defense.

A big thanks to Jeff Hartman, who is the editor over at BTSC, for putting this idea together. Poke around on their website to see if they believe Pittsburgh pulls out a victory this weekend. We’ll be back tomorrow with the X-factor and the final prediction.

Jeff: Stopping, or should I say slowing down, 49ers offense will come down to one thing, in my opinion. Stopping the run. This is no easy feat, and the Steelers have had their issues in run defense in the first two weeks, but if Pittsburgh stands a chance going across country to beat the 49ers, they have to make them one dimensional. It isn’t as if Jimmy G can’t throw the ball, and San Francisco can’t put up points through the air, but when the Steelers defense is dominant they are forcing teams to throw, and that means they can pin their ears back and get after the passer.

Minkah Fitzpatrick is someone everyone will be watching, he has spent less than a full week in Pittsburgh and is going to start at free safety. Will it be as he suggests, and “football is football,” or will there be a steep learning curve with mistakes along the way? Stopping the 49ers might not be a very real prediction for this Week 3 game, but forcing enough punts to get the ball back to the offense might just be the trick to keeping Pittsburgh in this game till the end.

KP: I’m wondering how much the 49ers will help their rookie sixth-round pick at left tackle Justin Skule on offense. Will we see even more play-action than usual? More two tight end sets? One thing we know is Kyle Shanahan will use motion to confuse the Steelers. He will also find your biggest disadvantage and milk it all game. Week 2, he used the lack of speed from the Bengals combined with misdirection against them. Week 1 Tampa Bay didn’t have anyone to guard George Kittle, so he did the heavy lifting for the offense.

One thing that will be something to keep an eye out for is how aggressive the Steelers will be. They blitzed the Patriots nine times. They blitzed the Seahawks 26 times. Jimmy Garoppolo wasn’t sacked in Week 2 and has only been under pressure four times all season. The offensive line, the scheme, and Garoppolo have all played a part in that. The Steelers would be doing the 49ers a favor by not letting T.J. Watt rush from the right side. I’d expect plenty of games up front trying to confuse the 49ers offensive line, specifically Skule.

This could be another Kittle game if the Steelers are going to play an aggressive scheme where their cornerbacks are playing press-man. The 49ers receivers are improved, but still inconsistent against press coverage. That’s where the pre-snap motion, something the 49ers used over 70% Week 2, could help free up receivers. Use pick plays, stacked formations, and bunch sets to confuse the secondary. The offense loves taking their play-action shots, and that should be there as well. This will be the first test for the offensive line, as the Steelers have Watt, Stephon Tuitt, and Cameron Heyward. All three could present a problem for the 49ers, especially when they’re running twists.

Four matchups to watch for the 49ers home opener