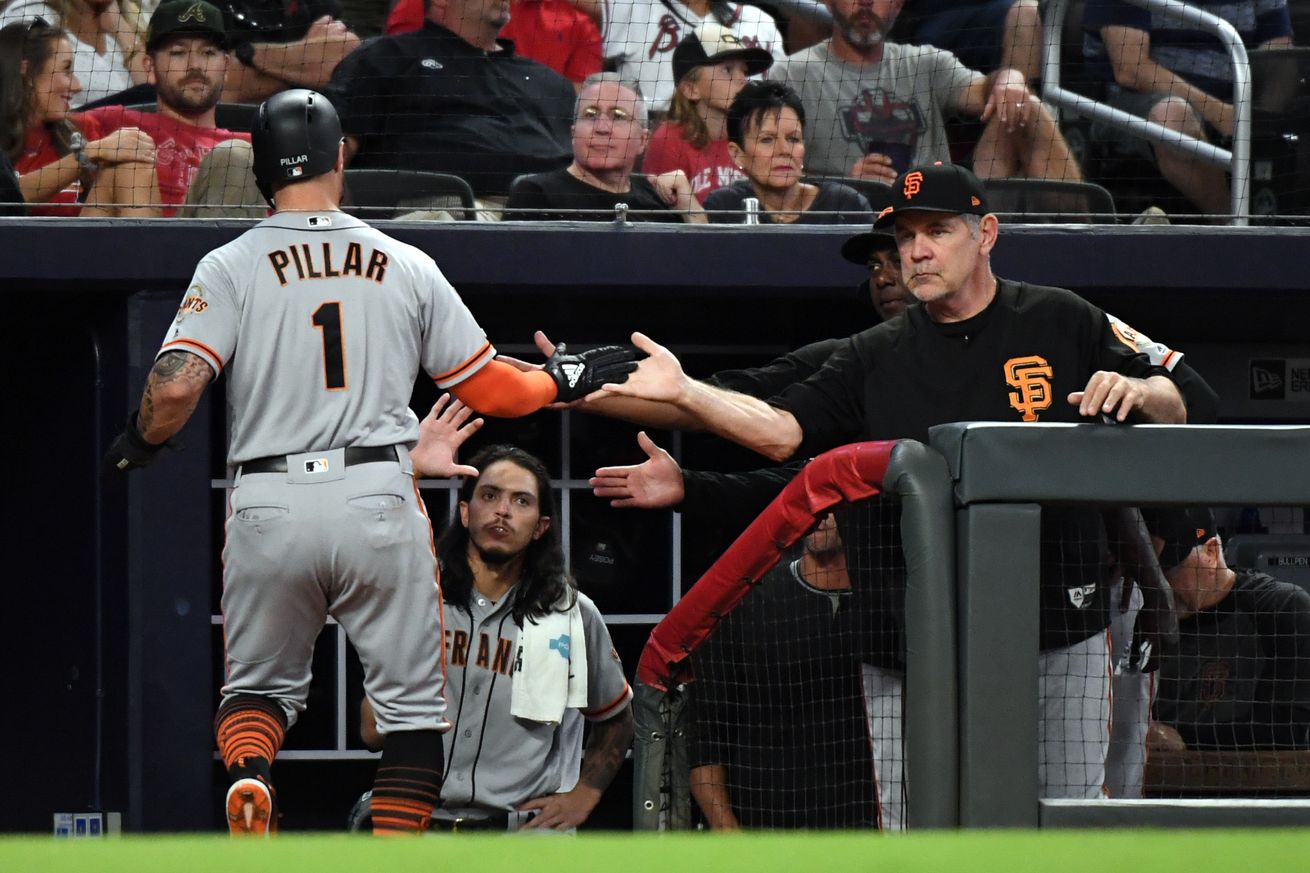 The Giants played a rerun of Friday night’s game in case you missed it.

The last time the Giants were in Atlanta, they combined for 24 runs in three games. They are presently on pace to score 1.5 runs in this series. The Giants usually resemble a competent offense on the road, but the bats achieved Oracle levels of fecklessness. If you can believe it, the Giants actually scored a run in this game.

Earlier today, I wrote about how the 2019 Giants have stolen fewer bases than any other Giants team since 1967. Naturally, Kevin Pillar stole his way to second base to bring his season total to 13. Pillar now has as many steals as the next four Giants leaders in stolen bases combined. The steal hasn’t been a part of the Giants game this year, but if it were for that swipe, the Giants would have been shut out for the second night in a row.

You see, when Pillar stole second, he put himself into “scoring position,” meaning that on a subsequent base hit, he would have a good chance of scoring. He did just that when Cristhian Adames singled through the left side. Pillar isn’t an avid basestealer, but he can do it when there’s need and he has avoided being thrown out at an acceptable rate. Maybe the Giants should acquire more players who can take an extra base every now and then.

There wasn’t a lot to cheer about in this game. This was mostly a workout for the young guys and some of the righties who don’t get a ton of starts. Aside from a couple singles from Austin Slater and the aforementioned RBI from Adames, there wasn’t anything particularly encouraging.

Jaylin Davis went 0-for-3 with two strikeouts. He’s now 3-for-29 to begin his major league career. He got a few pitches to hit tonight, but he couldn’t get the barrel on the ball. I don’t envy his situation. It has to be hard to adjust to major league pitching when you’re not playing every day. While it would be nice to see Davis crush just one dinger before the season is through, I’m guessing we’ll have to wait until spring training to see Davis shine.

Mike Gerber and Chris Shaw have looked equally lost at the plate. Counting his brief callup in May, Gerber is 1-for-24 on the season. Shaw, who made significant strides in cutting down his strikeouts this year in the minors, is 0-for-13 with two walks and six strikeouts. It’s important to remember that numbers as a September callup generally don’t mean much. Buster Posey, for instance, was 2-for-17 as a September callup. This doesn’t mean that Davis, Shaw, or Gerber are bad, but this also hasn’t been fun to watch.

After clinching the NL East title last night, Braves manager Rocco Baldelli ran out a lineup of the least hungover guys on the roster. Adeiny Hechavarria, Francisco Cervelli, and Billy Hamilton all have an OPS under .700 and all got starts tonight. They would be facing Johnny Cueto who hadn’t allowed a run in his first two starts and who had been mystifying hitters with his shimmies. This game should have been in the bag.

Cueto, however, didn’t have great command with his fastball. He didn’t leave a lot over the plate where it could be smashed. Yes, the pitch to Billy Hamilton wasn’t good as evidenced by the fact that Hamilton hit it. Mostly, he threw a lot of noncompetitive pitches. His fastball often missed well above the zone, and the slider wasn’t going to get chases down in the dirt.

When he made his pitches, he still had swing and miss stuff. The Braves never really squared him up. They only had two hard hit balls against him: Hechavarria’s double and a high fly ball from Adam Duvall. He managed to strike out Acuña twice, so that should say something about how effective his pitches were when he threw them where he wanted.

Ultimately, it was the walks that killed him. He walked three batters in the second, and each of them scored. This was Johnny Cueto’s 295th start and just the 11th time he walked five or more. It’s weird to see Cueto without command. I, for one, do not like it.

In the first inning, Ronald Acuña Jr. tried to bunt for a hit which seems like a weird decision for a guy with 41 dingers, but with his dominance over the Giants’ pitching, he needs some way to ensure he only makes it to first so he can steal the three bases he needs to make the 40/40 club. If he tries to put the ball in play normally, he’ll wind up hitting the ball over the fence. At the very least he’ll end up on second, and it’s much harder to steal third than it is to steal second.

Okay, maybe that’s a bit hyperbolic. Cueto and Sam Coonrod combined to strike out Acuña three times, and he never put a ball in play. Despite a second inning walk, Acuña did not get any closer to the 40/40 club tonight. If the Giants are going to get blown out, the least they could do is let the guy chase historic seasonal milestones.

Amy G reported that after Brandon Crawford made his sliding catch last night Mauricio Dubón was staring at Crawford with big cartoon hearts over his eyes and honestly, mood. Dubón grew up watching Crawford which is weird to think about, so Dubón reverted to fan mode for the moment after the catch. Crawford caught him creeping, though.

At which point, Dubón said, “You’re amazing,” which is just so pure. Watching Dubón and his effusive joy has easily been the highlight of September. He’s just so happy to be up in the majors and playing baseball with his heroes. No one tell him the Giants will never win another game.

Steelers vs. 49ers: Will the 49ers wide receivers win against man coverage?