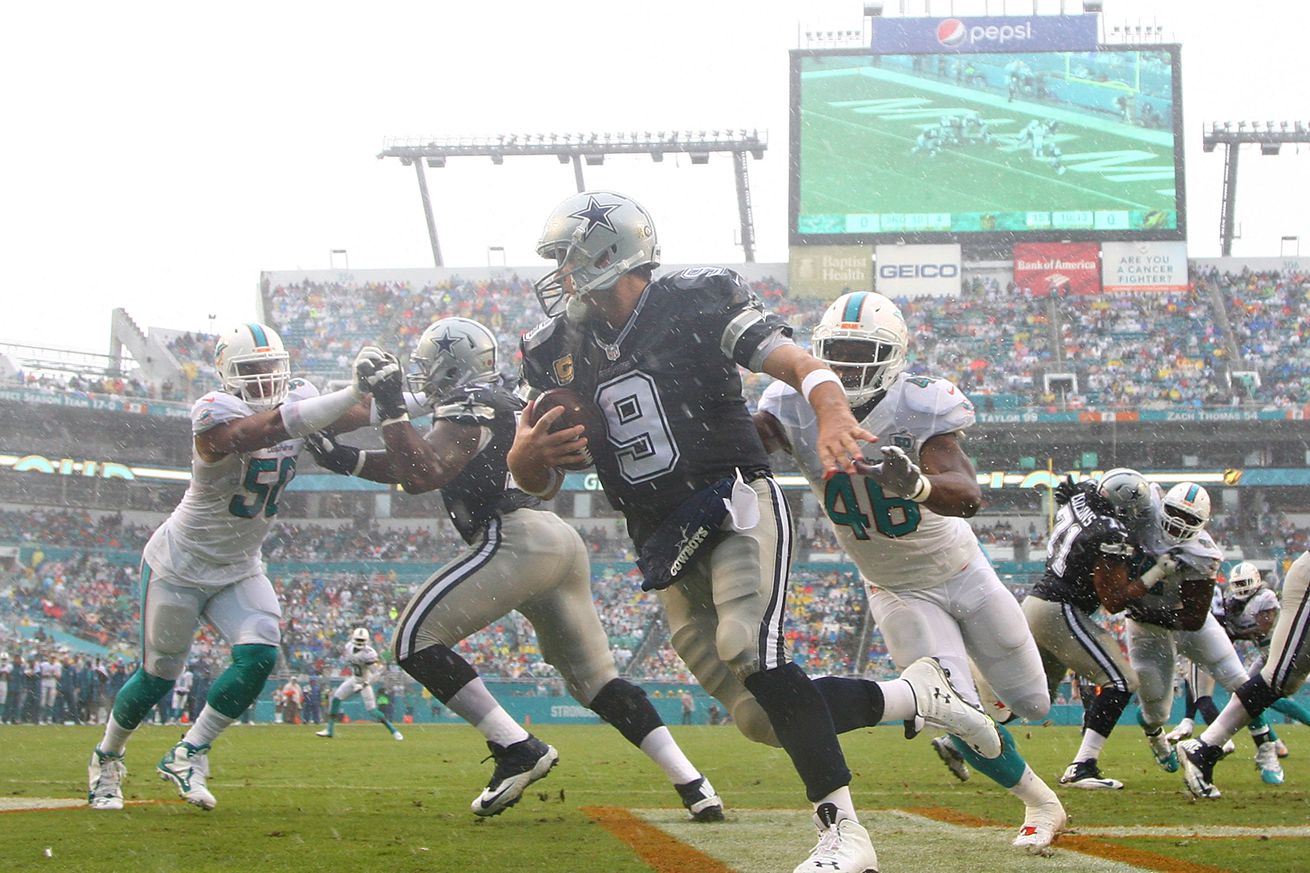 It seems like a long time ago, but it wasn’t that long ago.

The last time the Dallas Cowboys faced off against the Miami Dolphins fans were hoping the return of Tony Romo was going to rescue a season gone awry. Little could we know the game would be Romo’s last real hurrah in the NFL.

The date was November 22nd, 2015. The preseason prognosticators had pegged the Cowboys as Super Bowl contenders, yet the Cowboys entered this week 11 contest with an unsightly 2-7 record. The team was looking to end a seven-game losing streak. That was largely attributed to the absence of Romo, who had broken his collarbone in week two during a 20-10 victory over the Philadelphia Eagles.

Dallas stood 2-0 prior to Romo’s injury but would lose their next seven games, including the last four by a combined 18 points. But the putrid state of the NFC East meant that despite only two wins through ten weeks fans (legitimately) hoped Romo’s return would spark a late playoff push.

Romo could not have asked for more difficult conditions when he took the field for the first time since September. The Dolphins first drive ended with a punt, which went out of bounds at the Cowboys 4-yard line. Two runs and a penalty left the team facing a 3rd-and-12 from their own two, leaving Romo to salvage a third-and-long from his end zone. Making matters worse was a fierce storm had moved in so Romo also had to deal with the weather as well as the dire football situation.

In typical Romo fashion, he manufactured a highlight reel play. An unblocked rusher triggered a classic Romodini play, Tony spinning away then throwing a left-handed pass to Darren McFadden. McFadden came up just short of the first down, but the play was classic Romo.

The weather would improve and Romo smartly moved the Cowboys on their next drive to the Dolphins 13-yard line. On 3rd-and-six, however, the Dolphins again sent an unblocked blitzer at Romo and throwing under pressure the ball was intercepted. A smart, well-executed tackle by McFadden saved what looked like it would be a 98-yard return for a touchdown.

After the Cowboys defense had scored a touchdown on an interception return, Romo got it going on offense. A long Cowboys’ drive that started with nine minutes left in the half concluded with a 31-yard touchdown pas from Romo to Terence Williams with 1:08 remaining. It looked like Romo and the Cowboys were back.

They would finish off a 24-14 victory in ho-hum fashion. Rolando McClain returned an interception for a touchdown (little known fact: the Cowboys have scored only two defensive touchdowns since McClain’s interception. Byron Jones also returned an INT against the Redskins in week 8 of the 2017 season and Jaylon Smith picked up a fumble and returned it for a touchdown in week 16 of the 2018 season. That’s two defensive scores over the last 57 games.).

Romo would finish with a pedestrian 227 yards passing on 28 attempts with two touchdowns and two interceptions. The other touchdown pass went to Dez Bryant from 16 yards out.

I’m sure if you’d have told any Cowboys fans that day this would be the last time we’d see Romo start and finish a game you would have been laughed at, but it was true. As we know, Romo played four days later in a Thanksgiving tilt against the Carolina Panthers. Things didn’t go well.

Romo was intercepted three times in the first half, contributing to a 23-3 halftime deficit. The game - and the Cowboys season - was effectively over without a dramatic second half comeback. Any such hopes were extinguished when Romo’s collarbone was again broken on a rather innocent-looking play.

No one - not Romo, not his teammates, not the coaches or front office and certainly not any fans - could have possibly known Romo had taken his last meaningful snap in the NFL.

The remarkable series of events since then is a bit mesmerizing:

It’s highly unlikely this week’s match-up will yield anything as historically noteworthy. Dallas looks to be one of the better teams in the league while the Dolphins look historically awful. The Cowboys should win and regardless of how they do it (assuming they do) no one’s going to give them much credit for beating what looks like a semi-pro team.

But the Dolphins do remind us the NFL is an unforgiving beast and sometimes ordinary outcomes can prove to be major turning points.

All-22 Musings: Eye-catching plays from the Seahawks’ Week 3 loss