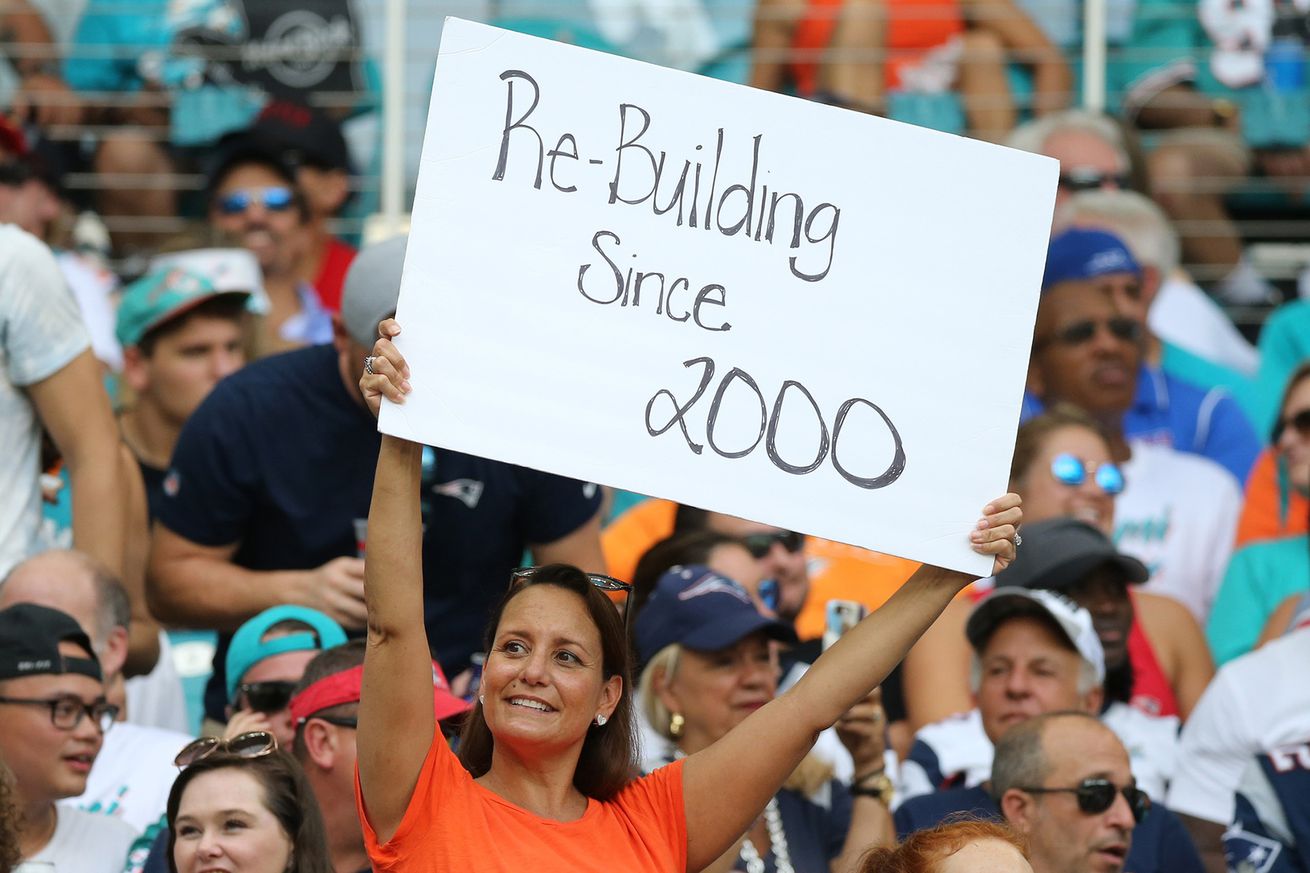 A little insight on the Dolphins from an expert.

It hasn’t been pretty for the Cowboys’ Week 3 opponent, the Miami Dolphins. Two humiliating blowouts to start the year have the team looking like full-on tankers. We checked in with Dolphins experts, The Phinsider, for some insight into what is going on over there.

Blogging The Boys: How do Miami fans feel about what is going on with the team?

The Phinsider: It is a very diverse set of reactions right now. There are some fans who are completely embarrassed by what is happening and are getting angry with fans who understand this is a rebuild period. There are the fans who want to see the Dolphins play well, compete for wins, but understand that short-term losing is helpful for the long-term success of the team. And then there are the fans that want to see the losses and want to see an 0-16 season, just to guarantee the first overall pick in April. Everyone is frustrated, and it is really a case of frustration with other fans more than it is with the team itself. No one wants to see the team blown out 102-10 over a two-game sample, even if you want to see the team go 0-16.

I think, overall, fans pretty much understand that, after years of throwing big names at the roster, the salary cap finally reached the point that the front office had to do something. Miami has the assets and 2020 salary cap space to make this a quick turn from bottom of the league to competitor, if they do everything right. I think that, in the end, that is what will make fans realize things are not as bad as the Baltimore Ravens and New England Patriots losses make them seem.

BTB: Do you think the team got a fair deal in the trade of Minkah Fitzpatrick?

TP: I was a little surprised they managed to get that first-round pick, especially from the Pittsburgh Steelers, who could use that pick next year. With Ben Roethlisberger injured, that pick could become a really nice compensation for Fitzpatrick. The Dolphins coaches and front office really did want to keep Fitzpatrick and use him as a piece around which to build the future defense - pairing him with Xavien Howard in the secondary gave Miami a huge head-start on that area of the rebuild. The reasons for Fitzpatrick wanting a trade were because the Dolphins were using him out of position, playing him more as a safety and an in-the-box run-supporter than as a slot or boundary cornerback. The funny part is, the Steelers have said they are planning to use him as a safety and not necessarily as a cornerback. I think there was something else going on that made Fitzpatrick feel like he needed out of Miami. I think he is going to be a star, but to get a first-round pick for a player that does not want to be with the team is a good deal.

BTB: Is the move to Josh Rosen right for Miami and what should Dallas expect?

TP: I think it was a move that had to be made. Ryan Fitzpatrick just could not get the offense into a rhythm. That may not change under Rosen, especially if the offensive line cannot figure out how to block, but at least with Rosen in the game, it feels like the Dolphins coaches are looking toward the future. There is the possibility that Rosen is the quarterback of the future for Miami, so now they can evaluate him in game scenarios. If the Dolphins still look like they did under Fitzpatrick and Rosen struggles, then we know the first pick will likely be on a quarterback in the 2020 Draft. If he comes in and shows signs that he can run the offense and has the potential to become something special, even if the Dolphins are not winning, then the rebuild may leap forward faster than everyone thinks.

As for what will happen this week, I am not sure we will see much of a change. Rosen does have pretty good chemistry with undrafted rookie Preston Williams already, having worked together as a part of the second team during training camp, so he could see the ball more. I would expect Miami to try to get the run game established early this week, mostly because the first two games have been so pass heavy as the Dolphins tried to make up points, so that could take off some of the pressure from Rosen. I think Rosen is more of a true deep-ball passer than Fitzpatrick, who likes to gun sling and just throw up the jump ball and expect a receiver to make a play. I do not think that is the difference in the offense’s success, and I really cannot find anything to say Fitzpatrick was playing poorly, but Miami has to find a spark of some sort to get the offense moving, and this is the logical move to try to make that happen.

BTB: Who are a couple of players that have fans excited about the future?

TP: Williams and Howard are probably the two easiest names. As an undrafted free agent, Williams impressed in the offseason training program and again early in camp and the preseason. He tailed off later in the exhibition games, but he has started the first two games and he had a gorgeous toe-tap touchdown in Week 1 - Miami’s only touchdown thus far - which makes the fan-base believe Miami may have found a diamond in the UDFA rough. Howard really is among the best cornerbacks in the league, but no one knows it because no one really pays attention to the Dolphins - and rightfully so at this point. Howard should continue to make a name for himself and, when the Dolphins get this turned around, he should become a star.

Christian Wilkins and Jerome Baker, defensive end/tackle and linebacker respectively, are another two pieces that look like they will be big factors in the success of the defense and continue that into the rebuild.

BTB: What would it take for the Dolphins to pull off an upset on Sunday?

TP: The team to actually show up would be a great first step. Rosen has to get the offense into any kind of rhythm. The Dolphins have had 23 possessions so far this year, 13 of which ended in a punt (with another 6 ending in interceptions and 2 turnovers on downs). They have to find an offensive identity and rhythm. If they can do that, they may be able to score some points. The wide receivers, DeVante Parker, Williams, Jakeem Grant, and Allen Hurns; the tight ends, Mike Gesicki, Durham Smythe, and Nick O’Leary; and the running backs, Kenyan Drake, Kalen Ballage, Mark Walton, Patrick Laird, and Myles Gaskin have the talent to at least compete. They just need a quarterback to find them and an offensive line to allow him time to find them.

On defense, it is all about the pass rush. Miami simply does not have one right now. The secondary could be the greatest one ever put on a roster, but they are not going to be able to cover forever. If a pass rush is not found, then the Dolphins will continue to struggle.

Thanks for the knowledge, The Phinsider.