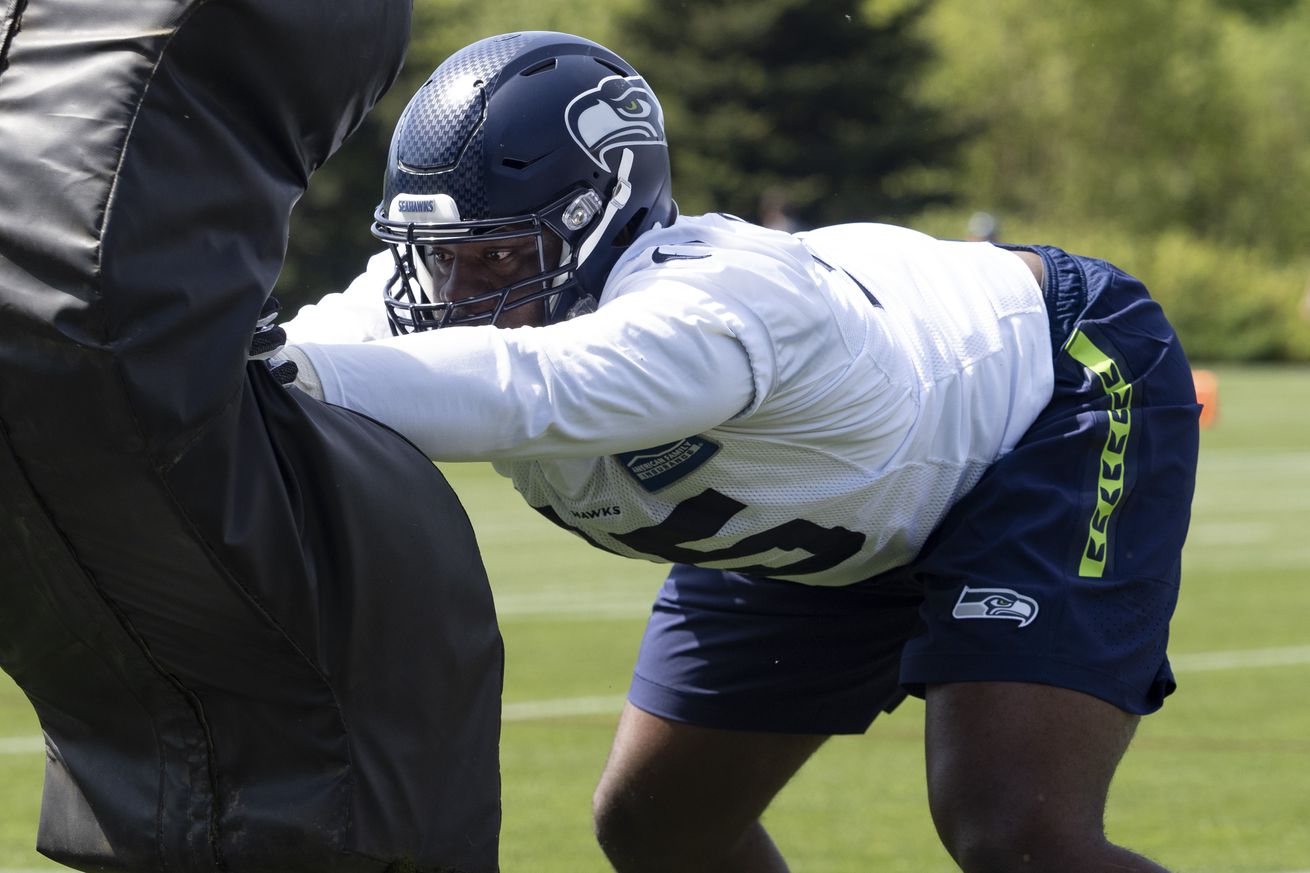 L.J. Collier made his debut in week 2 against the Pittsburgh Steelers. What with the acquisition of Jadeveon Clowney and Collier’s “unique” foot sprain, the 2019 first round pick has almost become a forgotten man. The 24-year-old’s Sunday showing was unremarkable, but did contain some promising elements.

Collier received 16 snaps and looked exactly like a player who has missed the majority of offseason action. The game looked too fast for him, with him often appeared out of puff after the whistle. His weaknesses were also exposed in a big way by a top offensive tackle in Alejandro Villanueva.

“Yeah, he was rusty,” Pete Carroll told reporters regarding Collier in his Monday presser. “He’s rusty, he’s getting going. It’s good that he got started, and no marks, or no pressures or anything like that. But, good start for him.”

Here is a cut up of L.J. Collier's first half reps pic.twitter.com/C0M4c9Uk1k

Collier’s very first snap was exactly why Seattle drafted him. Playing in the 5-tech defensive end role, the Seahawks expect penetration against the run and the ability to get slippy against downblocks. Carroll enthused about Collier’s “penetration ability” and the fact he is “really slippery” post-draft; this was what he was talking about.

(New format for these ️ threads, @ me if you dislike)

Collier's 1st snap was the exciting stuff he showed at TCU Lined up at 6i, he was assigned the C-gap. Reading the zone block to, he got slippy and penetrated the backfield, forcing the RB bounce and forcing the hold pic.twitter.com/iWWeXpqbEp

Collier’s best reps came, and are likely to come (especially in his rookie year), versus the run. “He possesses great strength at the point of attack, anchoring well, driving his legs and squeezing into his gap,” was what I wrote in my post-draft article on Collier.

This big Steelers run hit through the A-gap, so Collier wasn't to blame. But the big play still showed the good and bad of his game. Playing at 3t he was assigned the B-gap fit. He anchored strong but then lost to the technique flaw of releasing his foot off the ground. pic.twitter.com/ifvtLTKsT8

Collier really needs to add a reliable disengage move when it comes to his play against blockers. Snap #6 started as a good rep for him and ended bad due to not being able to get off the block.

Seattle has their ends play (sometimes) with 2-gap principles. Collier attacked the tackle here with decent positioning and, in theory, could have disengaged into both bend read lanes of this outside run away. But Collier lacks a disengage move and it ultimately hurt him pic.twitter.com/OCCka7I9H7

Collier’s hand usage in the passing game has noticeably improved since college, even in the small sample size of 16 reps. It still has some distance to improve though... On his eleventh snap, Collier was oh so close to pressuring or sacking the quarterback:

Collier got mighty close to a pressure/sack. He timed up his long arm well, beating the tackle to the punch. However, his chop move to keep his chest clean was *JUST* too late. Matt Feiler was turned and the corner open, but Collier was knocked back by the 2-armed punch pic.twitter.com/4YuWspUeQN

In the second-half, perhaps due to conditioning or maybe due to Clowney, who Collier appeared to be backing-up, wanting to play more, L.J. only played on 5 downs.

Here is a cut-up of L.J. Collier's second half reps: pic.twitter.com/vzW1tHKzbE

The biggest issue with Collier’s college tape was his balance issues. Too often, he fell on the floor. Searching for a reason, Collier’s forward lean came under the spotlight. It was an issue at TCU, an issue in Mobile at the Senior Bowl and is now an issue in Seattle.

I wrote in May: “Collier’s forward lean and pad-level is something that will be exploited by offensive linemen and requires counter moves. OL will, and did, yank Collier down, using his lean against him. Developing an effective knockdown counter move, like a snatch-rip or pull-armover, would prevent Collier leaning into the turf.”

Collier's forward lean is where he gets most of his power from. He needs to learn to re-set his hands more regularly. Such a lean is the biggest reason for Collier's balance issues. Savvy tackles (like Villanueva) will yank him down. This snap had nice hip turn buttt pic.twitter.com/C6JKhYMWV6

Finding an effective hand re-set move will be integral to the success of Collier as a pass rusher at the NFL level. So far, he hasn’t found that yet. Still, it was nice to see none of him trying to dip and slip through contact on pass-rush reps—this was disastrous in college and appears to have been coached out of Collier by defensive line coach Clint Hurtt.

Collier got one EDGE-setting opportunity against the Steelers and took it. Again, this wasn’t surprising. “Collier uses his length well, fully extending his arms to stay outside of the play,” was the offseason report. Here it is in NFL action:

Collier recovered against Alejandro Villanueva on the very next rep. Tasked with EDGE-setting, Collier beat the LT with a dominance of half-man relationships, extending his arm for the outside run to and gaining depth. It happened to be a RPO, but Collier won this rep. pic.twitter.com/hJIG8T16RK

Collier has been football-starved and week 2 saw him make a mistake that was born out of a keenness to prove himself.

It was visible that Collier hadn't played much for a while. He looked puffed on numerous plays. This was his 1st game for ages...

Here, he played with a "trying too hard" enthusiasm that saw him overly eager to get into the backfield. He didn't ID the RB screen. pic.twitter.com/zsp3Pk3R1R

Collier’s last play against Pittsburgh was a frustrating one from a pass-rushing standpoint. He absolutely needs a move other than a long-arm and bull-rush. There were elements of a pull-down attempt on this rep, but a swim move or a rip would have been hugely beneficial for getting the offensive lineman’s hands off him.

On Collier's last snap, he needed a counter or additional move to add in to his pass rush moves. Perhaps he was tired, but after initially being doubled he needed to find a way to re-set his hands/disengage from the single. A swim, a rip? Better than the weird pull. pic.twitter.com/aHBkU3ls1V

Ultimately, Sunday showed Collier to be the player his college tape showed him to be. Week 2 was a challenging maiden match-up for Collier who faced Villanueva, a two-time pro-bowler (2017 and 2018), for the majority of his snaps.

It was obvious that Collier’s ability as a run-defender would make him an excellent early-down/short-yardage 5-technique. The question was whether Collier, at 24-years-old, could learn to refine his pass-rush into something that will do more than knockback mediocre tackles with power.

Collier’s performance against the Steelers shows that the pass-rush is still a work in progress. The first-round pick still has those questions to answer and, with better conditioning, will get his opportunities rotating in for Clowney at 5-tech.

Should Miami Trade for Chris Paul?

After further review: The Cowboys new guys made quite an impact against the Dolphins